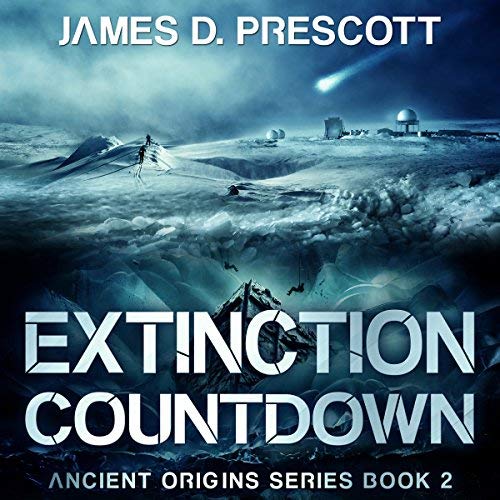 “Extinction Countdown” is the second book in the “Ancient Origins” Series, and I can say this book is just as good as the first, which I previously reviewed; if not better.  The story is very well crafted by James D. Prescott, and even though he is a rather new author, I have found his books complex, believable, and engaging.   The audiobook edition is skillfully and professionally performed by Gary Tiedmann who is one of my top five narrators on Audible to date.  The book is a contemporary science fiction story that feels a bit like X-Files combined with The Twilight Zone and an apocalyptic disaster movie.  I can tell you that the mix really works.  The book contains a fair amount of action, mystery, conspiracy, suspense, and even a bit of light romance to help relieve the tension.  The story is well paced, and the world created by Mr. Prescott will draw you in wanting more.  If you are a fan of aliens, genetic research, and strange signals from space, I think you will find this book quite enjoyable.  As this is the second book in a series, it is best to pick up the first book (Extinction Code) before diving into this one.

I was a bit disappointed that there was not a more in-depth prologue giving the listener some background information from the first book’s events.  Instead, the listener is dropped right into the action where the first book left off and if you are like me, it sometimes it takes a bit of time to get back into a story after being away.  A prologue often assists in getting me back faster than having to depend on my memory.  As with the first book, this one also had a fair amount of nostalgic references to the Twilight Zone and others.  You might remember from an older Twilight Zone episode a special book the aliens gave to mankind which was a twist once properly decoded?  In this book, you have much the same feeling and twists.  There is often a sense of both dread and hope intermixed and I liked the balance.  Additionally, I liked some of the back and forth between the story scenes and the way the listener is able to discover, or uncover, some of the mystery as it progresses.

One of the key components of the story focuses on genetic research along with some discussion on how a number of unique mutations evolved into the human genome.  The first book had the listener discover the code, and this book now focused on the limited time the world has to solve the mystery before being destroyed; this book starts the countdown. Not only do we have genetic research, but there is a fair number of alien investigation and conspiracies to complete the story.  The author’s research felt solid and comprehensive.  The story’s outcome felt believable.  Not only did our characters find some odd genetic traits, much like our own genes, these traits have both positive and negative effects on their carriers.  A few of the main characters were fighting for a solution as they had loved ones that were going to die if they failed.   On top of this, throw in some mysterious non-human bones discovered and things take a twist and turn from here.  Include a few new discoveries involving the Great Pyramids and there is a bit of panic and things get worse as martial law is imposed.

Turning to the audiobook’s narration, the listener can be assured that they will receive a high-quality production from Gary Tidemann.  His deep and haunting voice , which is a good thing, adds to the grim feeling throughout the book.  He is one of the narrators that you feel understand their material and is able to deliver more than simply a reading of the words, but instead adds depth and feeling to it.  I do not recall any issues with the audio itself.  I always look forward to new audiobooks being narrated by Mr. Tidemann.

For both parents and younger readers, there is some light use of vulgar language that I recall.  There are a few places where there are sexual topics or references to pornography.  Nothing too extreme, and for more mature readers who like detailed writing, I would recommend this as long as you are aware of these items.

In summary, if you enjoyed the first book in the series, this one is just as good if not better.  If it sounds like your type of story based on this review, I recommend you pick up the first and give it a listen prior to this one.  I do not think you will be disappointed with diving into this series as it is entertaining and engaging.  The characters have depth and feel real in an exciting and adventurous journey to save the world.