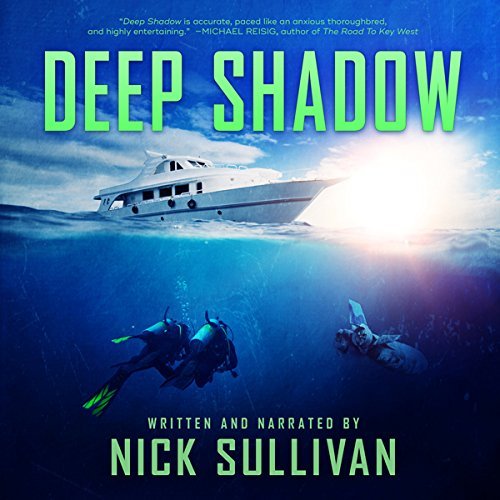 “Deep Shadow” is the latest action-packed suspense adventure novel, both expertly written and narrated, by Nick Sullivan; also, the famed author of “Zombie Bigfoot” which I also reviewed.  If you are someone who enjoys a good Tom Clancy story, 24 the TV series, or deep-water adventure like that found in both The Sphere or The Abyss movies, I really think you will be able to sink your teeth deep into this book.  The story takes the listener on a journey not only to many of the most beautiful Caribbean islands, but also into the depths of the ocean which are a very different and unforgiving environment.  If you are looking for an exceptionally well written and narrated book of adventure, pirates, terrorists, corrupt governments and drug runners, you will be happy when you dive (pun intended) into Deep Shadow.

I enjoyed that the author not only took me to one of the most stunning places in the North Western hemisphere, but he also added a level of action and intrigue reminiscent of an Indiana Jones story.  What happens when an out of work Russian sub designer is approached by a successful drug cartel to build them a mini-sub needed to aide them in their distribution?  This alone would make for a great story, but Deep Shadow is so much more.  Add to this the people hunting the drug runners and a terrorist plot to bring fear and death to a large number of people; something needs to be done to stop them both.  Here is where our band of explorers gets intertwined in all the events, and this is where the book really begins to shine.

The author paints this exciting world with big broad colorful strokes, yet one can also see the subtle and fine detail left by his inclusion of tidbits of information filling in and outlining the full painting.  Not only are we given this detail of the world topside, but we are also privy to the undersea world and even to the harsh realities of riding in a mini-sub.  The author uses chapter breaks to switch between the various groups of people, so the listener is able to see the activities of the searchers, drug dealers, and terrorists.  I enjoy when book provide such well-defined story breaks.  The main characters in the book all had depth, breadth, and unique personalities.  There were characters I loved, some I liked, and others I hated which means the author brought them to life vividly.  Instead of giving me a world made of cardboard, I’m presented with well thought out and developed world and characters.

Even though the book is mainly action-based, the author includes elements that make it feel real.  We are given views into some quite scary and emotional scenes and even a few glimpses of romance.  Even with all the very serious and powerfully emotional aspects, the author is able to weave in bits and pieces of humor along the way.  Similar to the scene from Michael Keaton in Mr. Mom when he refers to voltage being “220 or 221 volts, whatever it takes”, the author has his “AK whatever” scene when one of the characters is referring to an assault rifle; AK-47.  I also like the jab where one of the characters said, “boys and their toys”.  There is a good balance of emotion but don’t get me wrong, this is primarily an action novel.

As with Zombie Bigfoot, I think Mr. Sullivan did a wonderful job in both strong writing and professional narration.  I also thought the afterward chapter, found at the end of the book, to be informative and welcomed once the story was finished.  For me, I find the reasoning and understanding of why a book was placed in a given location or based on actual people quite fascinating.  It really helps me better understand the author’s intent and, in some ways, it feels like the author is opening himself up and leaving himself a bit vulnerable.  The book’s detailed use of technology, diving, and the drug trade makes me believe that the author spent a period of time researching prior to writing the book.  We learn about regulators, air mixes, active and passive sonar, sub steering controls, along with so much more, and at no time did I feel the author used technical terms to simply sound technical.  I almost feel like wanting to go and get my diving certificate after listening.

Again, like with his Zombie Bigfoot work, the audiobook’s narration was professionally done.  I like Mr. Sullivan’s smooth and rich voice, no matter the character he is narrating.  Not only was he able to voice female characters quite well, but he was able to also give one a believable UK accent.  It was fun to hear words common to a UK speaker also used by this character.   The recording quality, I was provided with a pre-release copy, was better than many of the audio book I have reviewed in the past.  The recording was clean of any audio artifacts and the narration flowed at a good rate.  One can tell the years of experience Mr. Sullivan bring to his narration.

For parents and younger readers, the book’s subject matter dealing with drugs, terrorists, along with some light romance may suggest it be targeted at a mature audience.  There was one innuendo I can recall and a few references to more indirect sexual topics.  The book contains some profanity; however, the author does not use it in excessively nor was it a surprise when I heard some based on the books plot.  Lastly, the book involves kidnapping and some quite graphic scenes of violence.

In summary, Deep Shadow is a fulfilling action-packed thriller with depth and dimension.  It was quite an exciting ride and I look forward to future work from Mr. Sullivan.  If you enjoy action movies or TV shows, I recommend you put them down and instead pick up Deep Shadow and give it a listen.

Disclaimer: I was voluntarily provided this review copy audiobook at no charge by the author, publisher and/or narrator.