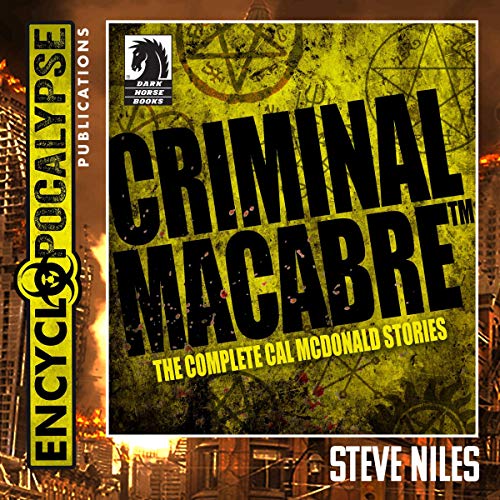 “Criminal Macabre” is a collection of “Cal McDonald” stories wrapped up in a single audiobook volume.  The stories consist of over thirteen hours of audio containing all of the material from the Cal McDonald books one thought five.  A few of the stories are novellas where the others are more short stories.  The compiled stories were written by Steve Niles who is an American comic book author and novelist mainly crafting books in the horror genre.  The Audiobook’s narration was exceptionally performed by Eric Bryan Moore who I previously reviewed for his performance of the “Damian Stockwell” series of audiobooks.  After listening, I could understand the author writing graphic novels as the characters and stories felt more satirical and humorous while there were quite a few graphic scenes that felt over-the-top.  The audiobook is really a collection of paranormal procedural noir horror tales each including a few facets of suspense and surprise.  If this is your type of genre, I would recommend the audiobook based on the amount of material for one’s Audible credit including great narration.

Unlike your typical noir or cyberpunk tale, this one involves aspects of paranormal activity in the likes of Ghost Busters elevated to a much greater level.  There is humor, satire, and zaniness.  However, our main character is a broken man who was a police officer that now fulfills specialized tasks relating to supernatural events.  Often, these cases taken on by our hero evolve from a basic request to a rather crazy set of events involving ghosts, ghouls, werewolves, vampires, and others.  I was hoping for the stories to contain a bit more detail and background as getting into each of them took me some time.  Even after getting some context, it was hard to connect with most of the characters.  For me, it felt more comic bookish than a deep and compelling story.  The feelings I had towards the main character were more out of pity due to his self-destructive personality and substance abuse, then a connection.  I was hoping the scenes would have been more detailed and the characters more complex than they were.

There were a few gems sprinkled in the various stories that caught my interest.  I like the author’s use of some unique weapons and scene locations.  I was able to feel the dark and dreary environment as I listened.  However, I wanted more.  More communication, more depth, more interaction and more complexity.  The bones of a great story were there, but I wanted more of the flesh and sinew as I listened.  I think that is why I saw it more as one would write if they were trying to describe a graphic novel or comic book.

The audiobook’s narration was performed very professionally by Eric Bryan Moore.  I have enjoyed many of his other audiobook and this one was no different.  The characters were strongly voiced, had distinctive personalities, and each one felt alive.  Inflection and other elements that assist a listener with expressions and events was executed well.  The thirteen hours of audio was clean and clear of any audio artifacts such as background noise, swallows, or page turns.  I quite enjoy the smooth tone and pace of reading when I listen to Mr. Moore.

For parents and younger readers, this set of stories is intended for mature audiences due to the amount of adult material and rather graphic violence.  Vulgar language flows steady from the first page to the last.  There is quite a bit of self-destructive behavior from the main character including a fair amount of substance abuse.  For this reason, I would not recommend this audiobook for younger listeners and even some adult many find it overly explicit.

In summary, the audiobook and its stories have a decent flow and there was a good amount of humor to offset the more graphic portions of the book.  The book can be consumed in smaller bite-sized sessions.  Both procedural and horror are not one of my top preferred genres, yet the stories keep my listening until the end.  The stories are told in a way that is a bit choppier than I like my stories to be, yet there was enough mystery keeping me engaged.