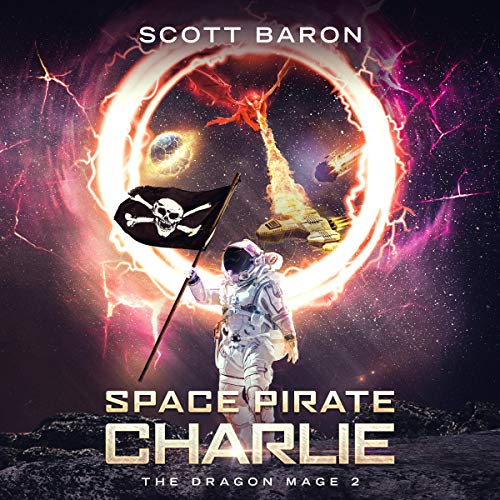 Scott Baron (author) and Gary Bennett (narrator) hit another ball out of the park with their second installment in the wonderfully well-written “Dragon Mage” series called “Space Pirate Charlie”.  Their first book, “Bad Luck Charlie”, left us with our main character still in a position of having pretty bad luck but not as much as he had started the story with.  Now, in this second installment, we begin to see Charlie emerging as something more than a simple guy down on his luck.  Instead, he begins to emerge as a force to be reckoned with.  The author and narrator do a wonderful job of blending both fantasy elements (who does not like magic, dragons, and monsters?) along with plenty of space and technology; including light-speed travel.  The mix is done so well that it is difficult to place this book in one genre or the other.  For me, it is more on the side of science fiction than fantasy, but either will suffice.  If you are a person who enjoys stories with an off-kilter sense of humor, space assassins, and more, you will like this story and all the while as you pull for Charlie to succeed.  This book is well worth your time and precious Audible credit.  I enjoyed it very much.

The audiobook contains a decent prologue helping the listener to remember some of the key aspects or events from the previous audiobook.  As with the first, there is action, adventure and quite a bit of mystery sprinkled in.  Even with that, be aware that this book requires a person to have listened to the first in the series before jumping into the second.  Most of the characters from the first book are found here in the second; Tuk Tuk is one of my favorites.  We also are introduced to many new characters as well.  I can say that I will never look at people named “Bob” the same way again; listen if you want to learn more.  Space Pirate Charlie picks up shortly after the ending of the first book.  So, if you have not yet listed to the first book, I highly recommend you pick up both as you will want to flow right into the second after the first.  As a side note, I just saw that book three in the series is now available on Audible as well.

The author does a very good job of creating a coming-of-age type story even though Charlie is already an older and mature man.  His continued growing and nurturing comes in the way he is able to learn and adapt to his given circumstances after his bad luck placed him in a world which he knows little or nothing about.  Over the two audiobooks in the series, we see Charlie becoming more comfortable and able to make decisions regarding his new magic-based environment as well as his understanding of this unique magic system that appears to power everything.  He has settled into his role as a slave and gladiator fighter for the entertainment of the wealthy, yet his ultimate goal is still in his sights.  Charlie continues to wear his slave collar which limits his freedom, yet this new owner is much kinder than his previous ones; or is he?

One of the more interesting things I found in this story was Charlie’s inclusion and use of technology from his world (mainly lost, confiscated or abandoned when he became a citizens of this alien world) as well as embracing and becoming comfortable with the magic which these new worlds revolve around.  Only by combining these two different systems was Charlie able to survive and thrive in this harsh and hostile atmosphere.  What could go wrong when you give an engineer magic and technology?  Another thing making this book great is the need and dependency Charlie has upon others.  There are some very strong bonds and relationships created in this book and they are tighter than the previous audiobook.  Without his companions (both big and small) Charlie would still be controlled by harsh slavers and never have a glimmer of hope of freedom.

The humor filling the pages is at times wacky and off-kilter, but it quickly grows on you as you listen.  It is not slapstick, but at times I found myself laughing out loud while listening.  There is a good balance of both humor and seriousness which was important for me.  I had to smile every time Charlie took credit for a quote or saying here on earth once he realized his companions never heard them before.  Much of the story reminded me of the TV series from the 90’s called “MacGyver” because Charlie is able to create a way out of most situations with nothing more than a paperclip.  Charlie’s engineering degree comes in to play many times in this story and because of his skills, he is able to move his ultimate goal farther down the field.

As for the audiobook’s narration, Garry Bennett is a professional in the pieces I have listened to from him.  The audio quality was great, no audio artifacts or background noises were observed apart from a few small plugs or edits.  The characters felt lively and each had their own personality which the narrator was able to maintain; even across the two books.  It was a solid performance and I look forward to more from this narrator in the future.

For parents and younger readers, I feel it is best to let you know that this audiobook contains a smattering of vulgar language, light crude humor, and sexual overtones or innuendos.  As with the first book, if any of these items easily offend you, I would say that it is more intended for mature audiences.  If you enjoyed the first audiobook, this one includes more of the same humor and language use.

In summary, if you are interested in vast battles, magic, technology and dragons, this is a book I would recommend you pick up and give it a listen.  There is mystery, and suspense along with even some aspects of intrigue.  You will laugh with Charlie, you will cry with Charlie, but most of all, you will root for Charlie’s success and ultimate goal of getting home one day.  Long live Charlie!