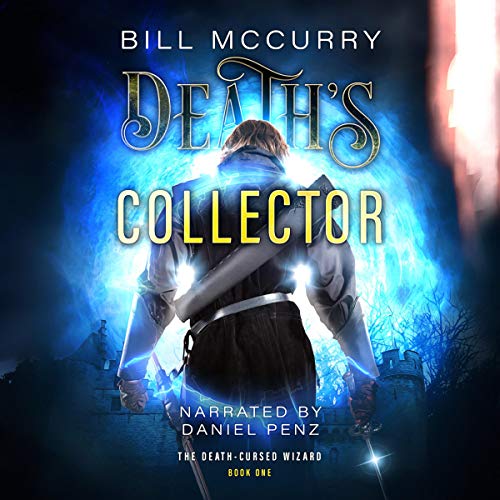 “Death’s Collector” is the first audiobook in the “Deals with Death” series which is a dark fantasy book filled with mythical lands oozing with sarcasm and humor.  One gets a good idea of what to expect in this from the author’s Audible page and the publisher’s company name. How does one get any writing done with four cats in their home, along with the author acknowledging who would win a knife fight between family members in his household.  This audiobook appears to be the premiere work of author Bill McCurry. It is very well narrated by one of my favorite voices Daniel Penz who is also the narrator of the wonderfully written Easytown sci-fi noir series. The book follows our main character who made a deal with one of the many gods that require him to murder an undisclosed number of persons to fulfill a debt he incurred.  The book is filled with surrivial, relationships, emotions, moral choices, and communications with the gods; having a feeling of greek mythology. If you are a person who likes fantasy books having a fair amount of cynicism, I think you will enjoy listening to this audiobook.

Early on in the book you begin to sense the storytelling ability of the author when our main character runs into a riddle giving water spirit in the likes of Monty Python’s Holy Grail.  The book involves a rescue mission for a kidnapped individual and there is plenty of murder and mayhem along the way. I liked the complex interactions between the party of searchers and even the many people they find along the way.  As the book progresses, we begin to see the difficult internal moral struggle with Bib and the need to fulfill his ever-present debt to the gods. The initial story setup was a bit slower than I would have liked, but I feel the author was attempting to establish the setting and characters prior to jumping right into the action.  I thought having an apprentice sorcerer along for the ride felt like a magical duo similar to Batman and Robin.

I found the ability for the mortals to speak with the various gods a rather unique and interesting aspect of the story.  Often times, these gods were in conflict with one another and each provided offers to humans in exchange for magical power (squares) permitting humans to leverage the magic for healing and other non-human abilities.  We also see at times a god would open an auction type event with more than one mortal and the winning offer would grant that individual a number of squares; for a price.. Such offers may be to murder more people to appease the god, kill someone you love, murder a moral person, and even attack children.  Oftentimes, mortals needed to sacrifice something to receive magical powers to continue their arts. Not only are there gods, we also have some creatures from the spirit world who in many ways are like genies due to their attitudes trickery. These two aspects made the audiobook rather interesting, and one never knew how the interaction between gods would occur.

For an audiobook that is as light hearted as it portrays itself in most places, it is really a veneer because the book contains overtones and undertones of despair and conflict from start to finish.  Not only the moral issues faced by our main character, but the many consequences which come from choices made. There are times that suffering of one is necessary to prevent the suffering of many others.  All of this activity is occuring while the adventure to ultimately save the kidnapped individual is the driving main goal. We see many side quests and other events that take the characters off the beaten path for one reason or another.  We are also shown just how hard it is to be a sorcerer in this place. One needs to not only survive the harsh world in which they live, but the potential of magic going wrong, and even all the interactions with the various gods.

What would I have liked to see more of?  Well, for me, I wanted to know more about the characters.  Maybe a chapter dedicated to the background on at least the main characters to make them more personable and likable.  I think a bit more time spent on world building and more side quests to provide some downtime from the main plotline. This would have also filled in some of the aspects of both characters or environment.  As well, I found the ending of the story to be more abrupt than I would have liked. It felt rushed compared to the setup and middle portions of the story. Note, this is only the first book in a series, so I can only assume we will get more details in future books.

The audiobook’s narration was performed wonderfully by Daniel Penz.  I enjoy his rich and deep voice both in this book and others I have listened to of his.  The audio itself was clean of any audio artifacts such as page turns, swallows, or background noise.  I did feel that this book was read at a faster pace than average books others have narrated or his previous performances.  The audio contained a few lite audio effects when the main characters were speaking with the gods, but for me it was a bit too much echo during these portions of the audiobook.  Mr. Penz did great with the many different voices and accents used in the book. A professional performance I have come to expect from this narrator.

For parents and younger readers, I would advise that this book be intended only for mature audiences.  The book contains a heavy amount of vulgar language, innuendos, and sexual references which I feel might not be appropriate for younger listeners.  The book contains scenes of graphic violence which could be rather detailed for less mature people. Had the use of language been reduced, I would think the book would have been enjoyed by younger readers.

In summary, the author did a good job of telling a unique story from the standard premise of a fantasy tale requiring a party to rescue someone.  We have that adventure, but also the aspect of the many gods and their interactions with humans and a quite different magic system. The narration was solid and enjoyable.  There are a few things I think could have been done to improve the story, but overall it was solidly entertaining.