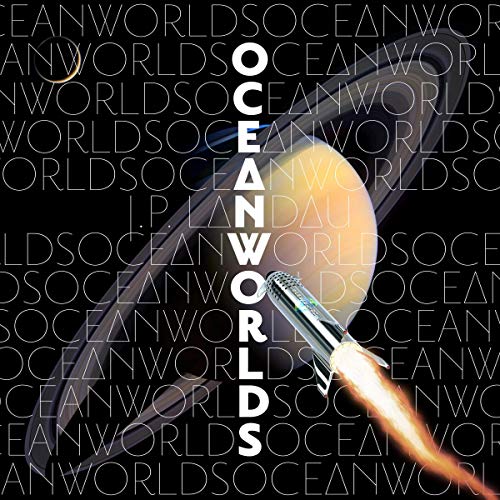 Quoting the new audiobook Oceanworlds, “Things are easy when you have no choice”.  When in space, choices can equate to disaster or worse. The story consists of an expansive and expressive contemporary science fiction space experience in the likes of the hit movie Interstellar (more on this later) with some rather unique and interesting events while our cast travels to and from the mysterious planet we call Saturn.  The book is the premiere work of author J.P. Landau (pseudonym) which took him over four years to complete. The audiobook edition is narrated by both Andrew Dennis and Caitlin Campbell; each is a relatively new narrator on the Audible platform. Yet, I found the narration to be overall professionally performed. If you are a person who enjoys large scale adventures along with the many complications involved in space travel, I think you will enjoy this story for the most part.  I found it important that much of the technology discussed in this book are either in the works or existing, so this adventure is not too far into the future. You will see in this book just how complicated space travel is to achieve. Such feats are really a miracle when you examine all the variables. This risk includes not only the failure of the equipment, but the psychological effects upon the travelers as well. It is not a perfect audiobook, but if you can put up with some of its flaws, it is quite enjoyable.

I found the research in the book to be detailed and important to the story.  IN many of the places you feel you are there with the crew. The author shows the listener just how difficult space flight and long distance travel is when he refers to the legacy work done by NASA with both the Gemini and Apollo programs.  He also called our the importance of the recent rise in commercial space flight by companies such as SpaceX, Blue Origin, etc. Things we take for granted today such as radio communication requires alteration to provide not only the amount of data but reduced latency; the time it takes for the signal to travel between the Earth and the spaceship in such a vast amount of space.  We are presented with the pros and cons of both radio and laser communications. Not only was it important to have the correct technology, people themselves need to be conditioned and trained for the long journey to Saturn. Again, I found that the author did a decent job of revealing just how difficult and vast space travel is. We see the importance of timing, orbits, schedules, and so much more.  One little miscalculation and the life of the crew could be lost. The author even included a cameo of Bill Nye, yes the “science guy” as he makes an appearance in this book. I liked the different perspective of those traveling to Saturn and the many Earth-based crew needed to support the team. The author also included some aspects around crew relationships along with many periods of emotional crisis each faced. But, even with all of this, I never felt that the characters were fully developed and dimensional like in the works of other well established science fiction works.

For me, there were a few areas where the book was lacking.  I wanted more character depth, background, and development than what we were given.  I wanted more of the pre-mission details. Both around the technology and personnel development of the crew.  What personal issues they have going on in their lives, what did they struggle with? As the initial chapters of the book set the scene, I felt many key components were passed over which could have helped me to be more involved in the lives and actions of the characters themselves. I desired to know and better understand the many psychological and physiological struggles with the crew.  I wanted more details on the technology and how it was developed. The book lacked many of the elements that make a story into something bigger that feels alive. I often felt that the author was more telling the story more like a data dump then as a storyteller would. Here is where I felt the story diverged from the many titles listed in the audiobook publisher’s summary. The book had body, but there were times I felt it lacked soul and substance.  There were a few places where the story meandered or felt disjointed from the other parts of the main storyline. This is not to say the story was bad or not worth your listening, but I wanted and expected more.

Let me turn to the audiobook’s narration.  Both narrators are relatively new based on the number of audiobooks listed under their names on Audible.  Yet, I found the narration to be professionally done with no noticeable artifacts such as swallows, page turns, etc.  I did feel the audiobook was read at a slightly faster pace than average making it sound faster than other audiobooks.  The narration of the various characters was well performed, however I did not enjoy the voice of the younger boy in the early parts of the book.  I will also say that it too me some time to get used to the back and forth between the two narrators and the way the author intended them to be used.  The use of accents for the characters was performed decently. I did have some difficulty with the pronunciation of the planet Uranus, but for the length and scope of the book it was a minor issue.  The book also contained a few pauses that were longer than normal or in odd places.

For parents and younger readers, be aware that the book does contain a few uses of vulgar language and adult subject matter.  The use of profanity seems to escalate in the second half. There were also some elements of graphic violence which may not be appropriate for younger readers.  The author includes some anti-religious components during character communications. If you are offended by any of the above, I would recommend you not give this book a listen.

In summary, the book was a good work for someone’s premiere release.  I enjoyed the many elements of technology used, but I wanted more of how and why such was selected.  The characters at times felt a bit flat, but I think with some backstory and or other bits and pieces shared with the listener, it would have felt more alive.  One gets a great idea of the complexity and vastness of space travel not only upon the ship but the characters as well. If you go into the book with knowing some of its flaws, it is a great premise and first start.