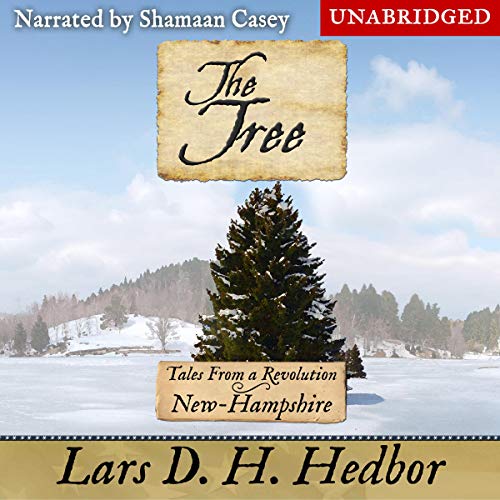 “The Tree” is another historic stand-alone piece of fiction from the well-written and well-narrated “Tales from a Revolution” series.  At the time of this review, there are currently five audiobooks available in the series on Audible.  This story takes the reader a bit farther north from others that occured mostly in the southern states.  Here the listener is dropped off somewhere in the state of New Hampshire around the time of the revolution.  This is the second book in the series which I have reviewed, and I can say that both books were quite enjoyable even though historical fiction is not one of my favored genres.  Of the audiobooks available, each is passionately and well researched by Lars D. H. Hedbor and for me, that is what brought it to life.  I quite like his story telling and many of the moral situations the characters faced as the book progressed.  Similarly, this audiobook is narrated by Shamaan Casey.  His performance during this story is done professionally and with emotion.  From my school days (quite some time ago), I would say history never was one of my strong subjects.  Often it was presented as a bunch of important but unconnected facts.  It was often difficult for me to piece it together the information and make it feel real.  What I like most about this series is that it brings to life not only the actual locations and situations, but in some circumstances, the people who lived them.  I would say that if you are a person who enjoys historical fiction, you will enjoy this series of books.  However, if you are like me, and history was not your thing, I think you will not only enjoy these books, but you will come away with a better appreciation for history itself.  I found myself actually learning and liking it.  That is not to say these books are educational only, but I could see them being used by schools to educate listeners with better retention than simply rote facts.

As with the previous book I listened too, you come away from this one seeing just how harsh and difficult it can be growing up at this time.  War, disease, and survival was center to all who were alive at the time of the Revolution.  Add to that living in one of the more northern colonies in New England and life just got much more difficult with harsh winters and lack of food; always.  On top of this, our main character, Abe has lost both his parents and is now being raised by his peculiar aunt with an interest in his newly inherited land harvested for its timber.  As the colonies expanded, this trade would bring a large sum of money to him.  However, the battle for what is yours and what is claimed as the King’s lumber to make ship masts causes a fair amount of tension.  Add in a rather unique neighbor and her pet and the story take you on a journey that you would not have expected.

The author did an excellent job of painting a picture of what it would be like to live during this time.  You feel an active observer watching the characters along with the scenery they are placed; which is quite vibrant.  Mr. Hedbor is a good storyteller keeping the pace of the story moving while also adding depth and emotion by way of revealing who the characters are and what motivates them.  I also felt he did a good job of including elements we struggle with today.  There are matters of deep prejudice and we are shown just how difficult it can be to overcome such.  There were aspects of suspense and mystery from start to finish.  I can say that after listening, I was not hungry for eggs for quite some time.  You eat what is available and sometimes that is the same thing over and over without complaint.  Remember that kids.

Narration by Mr. Casey was rich, bold, and clear.  The audiobook’s narration was solid.  I do not recall hearing any artifacts while listening such as swallows, page turns, or background noises.  I like the narrator’s intonation and the many characters felt different and unique.  Volume was also consistent.  The recording was professional, and the audiobook’s narration gives life to the people and places covered in the book.

Parents and younger readers, I do not recall any vulgar language used throughout the book.  The writing style I believe would be appropriate for readers of around 6th grade and above, yet it is not so simple that an adult could not enjoy it.  There are some difficult subjects covered and at times the writing may be complex for very younger readers to comprehend.  But I liked that the author did not simply write to a specific age group.  Nothing overly graphic and only some light romance along with bits of witchcraft and some minimum alcohol use were thrown in this tale.

In summary, this book felt different from the first I listened to in the series, and I think that is a good thing.  The style and writing were the same, but the locations, people and even the internal struggles were different.  Even though the stories take place during the same period of time, I found them unique enough.  They are a bit shorter, at around five hours, but it is well worth the time spend and you might even learn something as a take away.  I quite enjoyed the last chapter where the author provides details or changes, he needed to make for continuity in his story.  That really made things come to life for me along with the great narration.  If it sounds interesting, pick up the book and give it a listen.

One thought on “The Tree Audiobook Review”