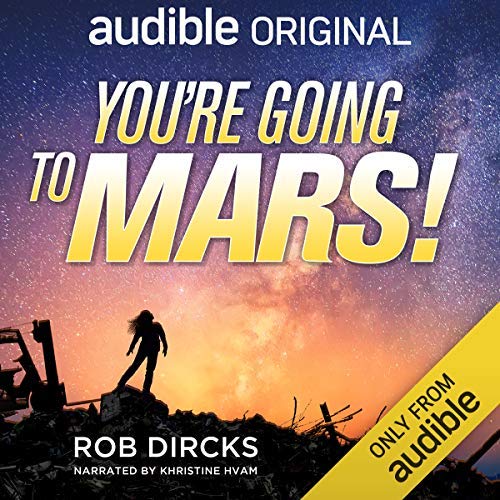 I have been a fan of Mr. Dircks works from his premiere release “The Wrong Unit”, to his “Where the Hell is Tesla” series, along with many of his short stories released by his publishing company Goldfinch Publishing.  If you have not visited his site or signed up for the free shorts, I highly recommend you do as these often fill that science fiction gap when you need it.  It might come as no surprise that this award-winning author has hit yet another home run with his latest work entitled, “You’re going to Mars!”.  Although I have very much enjoyed Mr. Dircks’ narration of his previous works, this book does not follow that tradition and is instead skillfully and outstandingly narrated by Khristine Hvam.  She is no stranger to the audiobook scene with over two-hundred and fifty books narrated on Audible at the time of this review.  As only Mr. Dircks can do, this story is a well-crafted mash up of humor, loss, suspense, survival, and even love told in a way that is both engaging and entertaining.  If you have listened and enjoyed any of the author’s previous titles, picking up this book is not optional; but a must.  If you have never listened to any of his works, shame on you!  This is a great book to begin a delve into the many colorful science fiction worlds created by Mr. Dircks.  What am I trying to say?  Simple, go get the audiobook and give it a listen, it really is that good and well worth your hard-earned credit.

Take a futuristic world where the real money is still found in those who control the planet’s waste and trash; much like our world today.  In this dystopian realm we have people that must work to survive, and most are indentured servants from generations past.  Being raised in this environment means that one has a limited understanding of things taking place on the outside.  Not only do you have your standard growing up struggles, but a mother who left years ago.  The family is raised by a father, sisters and a 97-year old (nanna) grandmother who makes things happen.  I know that was always the case in my family.  If you wanted something, go ask nanna.  Even in such a harsh environment, our main character has dreams and aspirations of one day going to Mars.  An impossible and unachievable goal in her current circumstance.  By shear happenstance our main character has her biggest dream almost in her grasp.  Does she get to Mars?  Well, you will have to read the book to find out.

So, what is the book really like?  The best way I can describe it is a combination of “Charlie and the Chocolate factory”, a bit of “Mad Max”, and a fair amount of reality TV; much in the way of Survivor, Big Brother, etc.  We have a dysfunctional family who interacts with one another often via numerous pokes, jabs, zings, and disses, yet they have to come together as one to accomplish their goals.  Not only the family, but we see a large number of people willing to sacrifice and suffer to fulfill the dreams of our main character.  We are given a view into an evil corporation trying to control everyone and everything, yet has a hard time suppressing the activities of a rather wealthy and eccentric TV producer.  It sounds like a very odd mash up, but Mr. Dircks makes it work and I enjoyed it all the way through.  At times it is very slap-stick and light-hearted, but there are time of deep emotion, seriousness, and pain.  The author adds elements of suspense and surprise and even some whodunit mystery with a few of the contestant members.  I can say this is a story that only Mr. Dircks could pull off and it is very enjoyable.  The writing is detailed and entertaining like many of the author’s other material.  The twists and turns he weaves into the story are subtle and clever.  The scenes are vivid and detailed.

I like his ability to make fun of pop culture and reality TV while not making them the center of the story.  We see all the crazy and salacious activities people will do to get more views, likes, or publicity on the show.  Often at the detriment of their lives and morals.  The show in the story reminded me a little of Fear Factor where the contestants needed to eat or perform an unnerving stunt to win.  Often such activities led to people vomiting all over; and in this book it is not very different.  Events like these often makes for ‘good’ TV, but we see that our main character has a laser focus on her goal of one day getting to Mars.  She is not one to play the game unfairly but realizes that being the only one to follow the rules may be to her loss.  I had to laugh out loud when one character makes a reference to Star Wars episode 15, and in many ways that is not far off after the Disney purchase.  We are also treated to how these shows are sponsored; this one by the beet foundation.  The funny thing is that one actually exists, I never knew.  Who also knew that it was a mother’s duty to correct their child’s grammar in life?  As I look back, I have to say this is also true.

The book’s audio narration by Khristine Hvam is near perfect.  The audio quality and performance were smooth and seamless.  Her ability to voice the many different characters and give them all unique personalities was done very well.  I have grown to be a fan of Mr. Dircks narrating his own works and although many authors are unable to be successful at both, I was happy to hear a female narrate this book.  I will say that Mrs. Hvam gave the book emotion, feelings, and life.  She did a good job of enhancing this already well-writing piece of fiction.  I look forward to listening to more works by her in the future.

For parents and younger readers, be aware the book does contain a fair amount of vulgar language in various places.  A few scenes also contain mature material referencing sexual portions of the human body.  There is also some graphic violence that may not be appropriate or quite scary for younger readers.

In summary, the book is one of adventure and discovery.  Although it is not a coming of age story per se, it does follow our main character as she grows and matures due to her circumstances.  You want so badly to see her accomplish her goals, yet there are so many obstacles she much overcome first to get there.  We also see how such cannot be accomplished in a vacuum, but requires the help of others (family, friends, and co-workers) to achieve.  As I said earlier, you cannot go wrong giving this book a listen if you like science fiction and great writing.  I hope you enjoy it as much as I did.