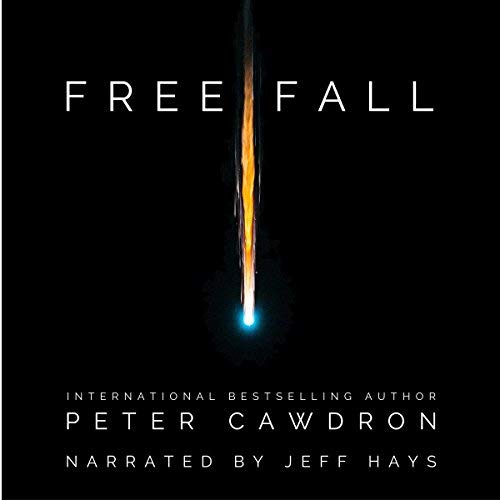 If you appreciate well-written science fiction that includes a deep and compelling story in as little as sixty pages (or just over an hour in audiobook format), I recommend you pick up “Free Fall” by Peter Cawdron.  I was unfamiliar with the work which was released in 2015, and I’m happy I spent my own money on getting a copy and the time to listen.  The book was recommended to me by a trusty friend telling me to read it without knowing anything except what information is provided in the publisher’s summary.  The story tells the tale of an astronaut returning to earth after a special faster-than-light experiment.  What he comes back to is quite different from the planet he let only a few months earlier.  The audiobook is skillfully narrated by Jeff Hays, which should not come as a surprise to those who have listened to his works or familiar with Soundbooth Studios production works.  If this short science fiction tale sounds like your cup of tea, I highly recommend you pick up either the digital or audiobook edition.

Just  word of warning: By continuing to read this review, you may be exposed to a few limited spoilers which could lessen your enjoyment or surprise of the book.  You have been warned

Before diving into reviewing this book, I was not aware that it was a prequel to another work by the author called “What We Left Behind”.  If you have already read the core book, having additional background to the story I’m sure is welcomed. Go get a copy.  Coming into the book blind, I was not aware of some of the things or events that would occur in Free Fall.  In many ways this made each paragraph a surprise and mystery for me; I liked the discovery aspect.   In the early portion of the story, it felt like another book I have reviewed called Solitude or the movie Gravity.  The author did a great job of letting us know the main character’s emotions.  His emotions were all over the spectrum from extreme excitement for be back home to the gravity of facing death when there is no reply from NASA’s communication team.  The author’s exceptional ability to create a detailed world, characters, and scenarios just felt real.  It felt like I was watching it unfold on TV.  I could have easily enjoyed a few hundred pages more of the events leading up to the ship arriving in Earth’s orbit, but I did not feel cheated in any way.

Ready for one of the main spoilers?  It is a science fiction prequel that upon reentry drops the listener into a world full of zombies and a sprinkling of survivors.  I had no idea, and although I suspected something catastrophic occurred on Earth, I was not sure what we would encounter.  I never saw zombies coming.  I’m not a big fan of the zombie genre, but I can say that I plan on reading the main book this prequel is tied too.  So, I think the intentions of the author to hook people who like space science fiction via this prequel worked; at least it captivated me.  Although it is a rather short story, the book is detailed and feels satisfying.  Even if you are not a fan of zombies, I would suggest you give this a try and see if it hooks you like it did me.

Need I say more about the book’s narration than to say that it is performed by none other than Jeff Hays?  The book’s narration enhanced the already powerful story.  Mr. Hays’ wonderful ability to create and voice nearly any type of character without issue continues to amaze me.  The audiobook narration helped me better visualize our main character and paint a picture I would not have had by reading the book alone.  The audio was clean, clear, and crisp, something I have come to expect from Mr. Hays.  Blending a great story with a great narrator makes for a super combination and enjoyable story.

For parents and younger readers, I would not recommend the book to younger audiences due to some graphic scenes of violence, language, and the overall horror theme.  Although it is an excellent story, I would say it is best enjoyed by more mature readers/listeners.

In summary, I would recommend you spend an hour of your life reading or listening to this book.  If you find it enjoyable, you like me, you will find yourself picking up the book it is a prequel of; simply for more of a good story.  The story is short but is feels big and it has the complexity and detail found in books three or four times its size.