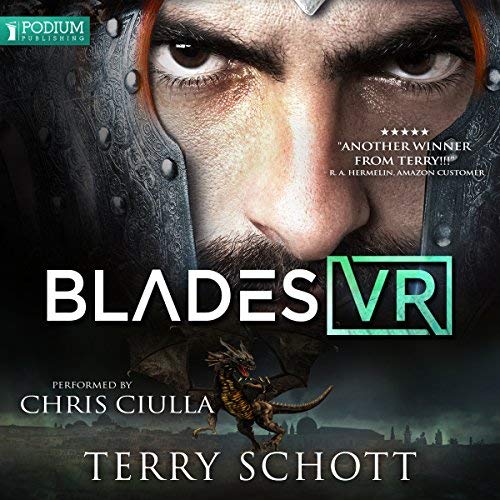 “Blades VR” is an expansive and lengthy contemporary fantasy story which I would better categorize as Literary Role-Playing literature.  The book is written by Terry Schott who is also the author of “The Gamer Is Life” series; which itself is quite well received.  The audiobook edition of this story is masterfully performed by Chris Ciulla who has narrated over seventy title at the time of this review.  Blades VR’s audiobook version provides the listener with over twenty-one hours of story and fantasy adventure, and in most areas, it delivers what one would expect.  There are a few bumps, bruises and blemishes along the way making what could have been an outstanding tale into one that is still exciting, engaging, fun, and overall exceptional.  If you are looking for a long-lasting audiobook and want to be taken along on quite an adventure, you may want to give Blades VR a listen.

What happens when one takes an existing Massive Multiplayer Online game and turns it into an immersive VR experience.  For those interested in playing, it is not simply a form needing to be submitted or a challenge to be completed.  Nope, to get into this new VR game, one needs to pay the required two-million dollar investment fee.  The story opens with some mystery and suspense around the company and its founder.  After the story’s setup, we are dropped into observe some of the first few lucky people to be a part of the game’s beta world.   The story has a feeling, from a fantasy perspective, a bit like The Lord of the Rings while also keeping things interesting from a science fiction perspective by having some noteworthy and unique technology driving the game.  I thought the author did a good job of blending the two worlds which are often seen as polar opposites.

I enjoyed the physical and virtual worlds the author created.  The scenes were painted well with a breath of color, and in some situations, he used only black and white or very muted tones.  The book contained action, secrecy, and even pieces of humor.  Many of the characters uses funny quips and banter between one another and this all seemed believable.  I liked some of the bits and pieces of nostalgic references used in the book such as my beloved Sea Monkeys, and many past and current MMORPGs.  The dialogue was well paced, however I would have like to have had a bit more definition in the way the story unfolded.  The book at times seemed to meander and it took some time to get back on track.  Do not get me wrong, it is a solid story if you can put up with a few speed bumps along the way.  Similar to the Sea Monkeys I ordered when I was a kid, I wanted more from this book’s offering as the premise and setup hooked me from the start.  It simply needed some more time at the whetstone or with the armor smith to be polished and sharpened.

The story is vast and complex.  It was overall enjoyable, and I liked most of the defined characters and worlds; both physical and virtual.  I liked that the story at times was told from various character’s perspectives, but this took some getting used to at first.  In most cases, these two worlds (physical and VR) were separate from one another, yet the author does well when transitioning between them.  We are also given a glimpse of time when they come together.  Like most virtual fantasy worlds, we are shown many of the familiar tropes such as elves, druids, dwarfs, and imps.  But we are also presented with a few more powerful and scary creatures like dragons, liches, and even a bard.  Who plays a bard?  Also, if you are given an assignment hunting for killer squirrels, I suggest you turn the offer down.  I’m just saying, you have been warned.

I thought the author did a good job of blending in a little romance, tons of action, and massive amounts of questing.  Yet, with any corporate entity, the question is always how they will best monetize not only the game, but all the other intellectual property (IP) while getting non-games involved.  Adding elements around how one’s physical body if affected by activity in the VR world was interesting.  A person’s physical body may be still be in a coma-like state, yet their mind is fully active and engaged in the VR.  One of the things I thought was a bit odd was that this audiobook contains what is assumed to have been three physical books.  Each book in the trilogy has its own prologue, epilogue, and chapter numbers.  So, one minute you are listening to chapter 40 something, and the next you are back at chapter 1; but in book two or three.  I would have preferred to have this redone in the audiobook or told in the book’s description, but this did not take away from the story in any way.  For me, I have to say that I enjoyed most trying to figure out how the characters were going to “MacGyver” their way out of a situation.  Here the author does a decent job of often surprising the listener.

Turning to the audiobook’s narration.  The performance was solid, clear, and clean of any noticeable artifacts.  I thought Chris Ciulla did a good job with inflection and setting the mood of the story with his rich and deep voice.  At times it was more difficult to distinguish one character from another if you were not fully paying attention.  I will say that I have listened to other narrators who are able to more easily voice multiple characters either through accents, etc.  For a book as long as this one is, it would have been nice to have had this more defined and consistent.

For parents and younger readers, the book overall is quite lean in its use of vulgar language.  It was so infrequent that when a word is used, I had to think twice to make sure I heard it correctly.  One time I actually rewound the audio making sure I was right.  There are a few uses of alcohol both in and out of game along with some very light sexual innuendos and character banter which may be considered more mature focused.  Apart from these items, I was quite impressed with the author’s ability to keep the book rather clean and on topic.

In summary, the details I provided in this review only cover about a third of the notes I took while listening.  I like that the book was big and felt like the adventure was going to be grand.  There was action, suspense, romance, and grief as the story unfolds.  We have your typical good versus evil battle, but things take a surprise turn along the way.  If you like fantasy books with a touch of science fiction blended in, I would recommend you give this book a try.  Is it perfect?  No.  However, sometimes it is the flaws that set us apart from others and this book uses them to its advantage.