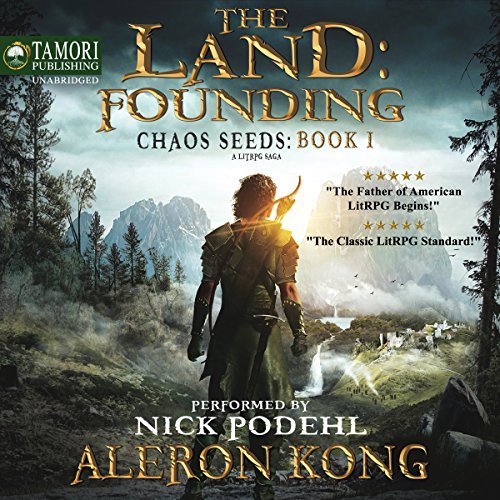 “The Land: Founding” is the first book in the “Chaos Seeds” series.  It is a Literary Role Playing Game (LitRPG) book written by Aleron Kong.  The Audible edition is perfectly narrated by Nick Podehl who has over three-hundred titles currently narrated on Audible.  If you are looking for a solid series in the gaming genre, I highly recommend you give this series a listen.  If I had only listened to this book, and not the other two available, my review would have been very different.  I would have instead called out many more of its faults and weaknesses, rather than viewing it based on the series thus far.   Even though I callout some of the issues with the book below, I will say that if you stick with the series it is well worth your time and credits.  The series and the author’s writing only gets stronger as you progress to the later books.

The Land of Founding starts off like many others in the gaming genre and there are many of the standard tropes of characters; rogues, fighters, magic users, etc.  I did have to laugh out loud when the author included a section describing how no one reads the EULA (End User License Agreement) on products and because of this, the game is able to include a few things that no one would agree too if they knew the consequences.  I liked that the book poked fun at the computer industry and gaming in general along with a few more current events.  Every good LitRPG needs to have at least one goblin or imp, and this book is no different. It will be interesting to see the impact our main character has after interacting with one early on in the series whom he promises a favor too.  Favors often come back to bite you even if it seems like a good thing at the time.

I found the magic system, leveling system, and item discovery to be quite interesting, but not so far from what one would expect from other games that it was quite easy to follow.  The magic system included item enchantments, along with other ways of bringing up the characters abilities.  I felt the leveling system actually had an impact on the character without making him superhuman at level two.  The way the main character entered the world was a bit unique from other book I have read in this category of books, and his newly assigned assistant was like a humorous Jeeves character; also, well voiced by the narrator.  The book includes some deep and dark caves, skeletons, and other familiar creatures, while also adding a few more exclusive ones.  It should be noted that the book at times takes a darker turn, but again this seems to match the character’s overall personality.

For me, the book seemed to flow and get really good about halfway thought.  If I had given up on the series too early, I would have missed out on what all the people giving the series high praise found in it.  I’m glad I kept with it, and I think you will be too.  There is a good amount of banter between the characters, while at the same time you find there are also quite strong bonds.  The characters really form into a cohesive fighting group where there are very tight connections.  One of the lessons you will find in this book is that all actions have consequences, and one needs to be ready to face them when they come.  The series continues, however many of the quests and main story lines close out at the end of the book.  There are a few open-ended questions and cliff-hangers that will have you wanting to pick up book 2, and I think you should.

I very much enjoyed the narration and additional sound effects used.  This made the book fee polished and professionally produced.  There were a few slight volume inconsistencies in the earlier parts of the book, but this was corrected in later sections.  The narrator did a good job of creating feelings of action or tension along with a few quite a few emotional events.  The book is not simply a narrative as it is more of a tale told by a storyteller.  You, as the listener, will feel a part of the evets and actions taking place throughout the story.

Parents or younger readers, take note that the book contains a fair amount of vulgar language along with quite a bit of crude or childish speech.  Neither seemed to be fit within the fantasy world and I had hoped the author would have leveraged other words for expressiveness.  The book also has some fairly graphic scenes of violence which may not be suitable for younger readers.

In summary, the series thus far is worth the effort if you are able to get over some of the blemishes and more childish writing style.  All of these improve as you progress thought the remaining books.  I have only listened to three of four currently available, and it appears there are at least six books planed at the time of this review.  If you enjoy LitRPG books, this is a series I think you will want to pick up.

Disclaimer: I was voluntarily provided this review copy audiobook at no charge by the author, publisher and/or narrator.