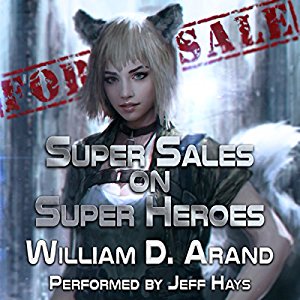 What do you get when you smash a super hero story with a literary RPG?  Well, that would be a newly released book by William D. Arand entitled “Super Sales on Super Heroes”.  The story is a rather unique, dark, and humorous take on the super hero genre.  As the saying goes, when life gives you lemons, make lemonade.  Our character is dealt a super power which seems lame until he discovers a loophole in the system allowing him the ability to change not only his own life, but that of potentially hundreds if not thousands of others along the way.  If this story sounds different and interesting, it is because of the author ability to deliver on what the book says it is about; with Jeff Hayes as the narrator of the audiobook edition, it only gets better.  Let me say up front that this book is geared towards adult readers due to some subject matter and graphic violence.  If you enjoy humor, twists, and the unexpected, you will find Super Sales on Super Heroes an enjoyable book.  I will never look at pancakes or sausages in the same way after reading this book.

For every super hero one needs super villains to keep things interesting.  A way of offsetting the balance of powers.  In a world where villains rule the city and the main character has a super power that appears to be useless.  All seems lost and hopeless.  That is until he discovers he can change the attributes of things he personally owns by paying the stated credit; similar to experience or skill points.  He learns that one can purchase tortured and nearly dead super heroes on the black market for a good price and because they become his property he is able to make modification to them.  Not only do these super hero slaves gain him additional points to spend on upgrades, he can also use them to purchase additional slaves saving them from certain death.  Here is where the story begins and a new corporation is born.  What better way to shield yourself from the ruling villains than to set up a tax shelter corporation hiding your assets; a newly created army of super heroes.  The book is full of pithy wit and satirical humor poking fun at the gaming and super hero genres.

Take all the above and add in a few extra elements such as nanotechnology, discussions around renewable energy, along with many pokes and jabs at our modern society woes such as healthcare and there is not much more that you can do but laugh.  The book is light-hearted, at times over the top, and can be prone to meandering in places.  But, the characters were likable, relationships were forged, and alliances were created.  It truly felt like a super hero story.  When you peal back the humorous veneer, there really is a well-written story under the covers.  Because it is the first in a series, we will have to wait and see what becomes of our hero along with all of his companions.

Jeff Hays never fails to amaze me with the quality and professionalism found in his audiobook narrations.  He knows and understands his material and assists the listener in better understanding the story.  He is what I would consider the master of this genre when it comes to narration.  The characters all had unique voices and personalities from one another.  When listening the book seems so natural but it is all the little things Jeff adds that makes the book seem effortless.  Subtle things like modifying the characters voice when having an inner dialogue, character accents, and inflection added the cream on top of the milk.  There were no issues with the audio itself.  It was clear, consistent, and even.  No noticeable audio artifacts or issues were detected while listening.

For parents or younger readers, be aware this book is intended for mature audiences only.  Even the author’s summary contains a warning because of some potentially objectionable content.  Vulgar language is used, which can be strong and heavy at times.  The book also contains a fair amount of adult subject matter including sexual references or innuendos.  Additionally, there is a fair amount of graphic and excessive violence throughout the book.  If this subject matter offends you, I would not recommend the book to you.

If you are looking for a light entertaining read, and you can put up with some mature subject matter, I believe you will enjoy Super Sales on Super Heroes.  I have to give kudos to the author for wonderfully blending these two genres together into a fun tale.  Not that it affects the story, but I also wanted to acknowledge the book’s cover art.  I felt it mirrored the storyline and overall feel of the book.  In a world that is upside-down, it will be interesting to see how our main character is able to overcome all the obstacles faced in the first book along with the books to come.