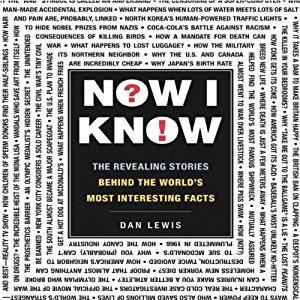 “Now I Know: The Revealing Stories Behind the World’s Most Interesting Facts” written by Dan Lewis and narrated by Jeremy Arthur is a great book for people who like little snippets of trivia including a “bonus fact” or two after each segment.  I will say that it appears the author has greatly expanded on this idea by creating a series of “Now you know” books or clips concentrating on specific topics (e.g. animals, space, etc.).  There are also a few audio clips (< 1minute) that address a single subject on Audible doing a quick search.  I like to learn and be educated, however I felt that this book was written toward a generation who wants all of their information feed to them in bite-sized commercial length (30-45 second) chunks.  If this sounds like something you would be interested in, I recommend you pick up the book and hopefully learn something new.

The book set a level of high expectations when it claims it can cover one hundred outrageous topics in just over 258 pages or six hours of audio.  For the audio edition, that equates to 6.6 hours (366 minutes) to cover 100 topics equating to 3.66 minutes devoted to a topic including a bonus fact (or two).  Some of the topics I’m sure are ones you have already known about if you are a news reader or interested in bits of trivia, while others I’m sure you will find new and somewhat informative.  I liked that the author grouped the topics in a way that made sense when listening and for those topics you may be more interested in.  For example, if there were a few topics that revolved around space, these were found in succession in the book.  What I did not like was that the book lacked any level of depth.  It was more like picking up one of those bathroom trivia books (you washed your hands, right?) where the information is all given in a minute or two at most.  I would have preferred to have half the number of topics covered if there was twice as much depth given to each of them.

I thought Jeremy Arthur did an exceptional job with the book’s narration and at times even helped make a given topic more interesting due to his use of inflection.  His voice is pleasant to listen to and the audio was professionally recorded.  I do not recall any audio artifacts while listening to the book, nor were there any areas of audio inconsistency in the book.  With over one hundred and seventeen books currently narrated (at the time of this review) on Audible, Mr. Arthur did not disappoint with this book.

So, did I like this book?  Well that is a difficult question to answer.  In some ways, I enjoyed the subjects covered, but felt that there just was not enough time devoted to each given topic making it seem like I learned anything new or interesting.  I thought some of the cited material was a bit weak or from sources that would not be considered always trustworthy or reliable.  For me, it is more about that I like quality (depth) over quantity (the number of topics covered) and this book seemed to be the opposite.  I often found myself asking additional questions which the book did not cover requiring me to go and research them myself; maybe this was the author’s intentions.  I’m not sure.  For general trivia people, I would say this was an OK book, but go into it knowing it lacks any level of depth on the topics covered and you will be prepared.