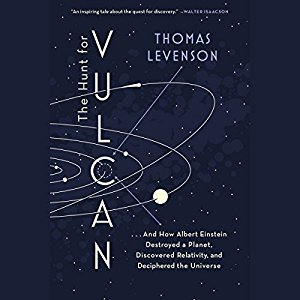 The author Thomas Levenson and narrator Kevin Pariseau take you on a journey to find a lost planet in his book “The Hunt for Vulcan: …And How Albert Einstein Destroyed a Planet, Discovered Relativity, and Deciphered the Universe”.  That title may sound and little daunting at first.  It may also sound like the title of a scientific dissertation paper which may scare a few away from listening to the book.  However, it is written so a lay person can enjoy and even be educated while your astrophysicist friend will find the book fascinating.  If you have any interest in how mathematics, science, and astronomy works when proving or disproving aspects of our universe that are often out of reach, you will enjoy this book.  It contains just shy of 6 hours of audio narration, and it is well worth your invested time.

What does science do when mathematic theory established by Sir Isaac Newton for over half a century proved the existence of a rogue planet in our solar system near Mercury but the planet itself has not yet been able to be validated?  What does science do when many claimed to have captured this ghost planet at various times during their search, but each attempt was never confirmed?  What complicates things even more is when a scientist going by the name of Albert Einstein, using his theory of relativity, turns things upside down and proves this planet cannot exist based on Newton’s theories; believed to be unchangeable laws.  This is exactly what this book addresses.

You can clearly see that when science conflicts with one’s own biases, truth itself can often be repressed or blinded.   What complicates matters even worse is when one includes the weight of the scientific community along with heavy peer pressure, people will often fall in line instead of rocking the boat.  This is one of the main failures of science then and still is today.   It took a new way of thinking about our solar system for people to conclude that the mystery planet never existed.  That new philosophy was brought on to the scene by Albert Einstein.

The author did his research and the book is well written.  That is no surprise when it was authored by the professor of science writing and the director of the graduate program at MIT.  As stated previously, just because it is written by a scientist does not mean it must be read by one.  The book us also wonderfully narrated by Kevin Pariseau who takes us on this brilliant journey in to the life and minds of scientists and how what we often think as infallible data can be often be found to be fallible.  The audio was without errors and the pacing of the book was on par with my listening speed.

I highly recommend this book for people interested in science, history, mathematics, space, and even in some ways psychology.  If you are an armchair scientist or space nerd, you will also like this book, and probably learn something along the way.  It was well worth my own credit to hear this book.