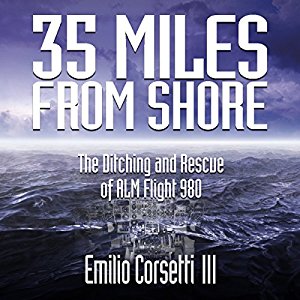 As with his previous book “Scapegoat”, Emilio Corsetti III does it again with his new audiobook release titled “35 Miles from Shore: The Ditching and Rescue of ALM Flight 980”.  In the book he tells a gripping, action packed, well researched story that is wonderfully narrated by Fred Filbrich.  Portions of the story include re-enacted communications from various transcripts or interviews which brings it more to life.  It would be difficult to write an action thriller as good as this book, and it is often hard to believe the events told occurred in real life as a piece of non-fiction.  If you are one who enjoys stories around flight or airplanes, this is a must read/listen.  If you are someone who likes documentaries of people surviving difficult situations along with the many complicated efforts involving search, rescue, and accident investigations, this is a must read for you too.

I am a certified private pilot (Cessna 172s) and have enjoyed books on flying most of my life.  However, this story, as told by the author involves so much more than just another airplane or flying tale. It reveals the actual events that occurred in 1970 when a DC-9 jet aircraft was required to perform a water ditch (landing) due to fuel exhaustion.  It is the only known event of its kind at the time of the book’s writing; sense then other ditching events have occurred but they are rare.  Mr. Corsetti provides the reader with a first-class seat into what airlines, aircraft, and air travel, looked like back in the 1970s, and I can say it was very different from what it is today.  Yet, in many ways it has not changed.  It is amazing that this event was the largest and most involved search and rescue to have ever happened in the Caribbean Sea.  It received assistance from the Coast Guard, Navy, Marines and a handful of local vessels.

The book opens by informing the reader about the concept of an “accident chain”.  This idea claims that any type of accident (aviation or not) really is a chain of events that if only one can be prevented the accident most likely will be prevented.  Mr. Corsetti walks the reader though all the various issues and events that led to the eventual accident.  This involved mostly people and process errors, the machine itself did what it was expected to do when it ran out of fuel.  He goes in detail about the flight events leading up to the disaster.  Goes over the seconds just prior to the ditching and the events right after the crash viewed from different perspectives based on people’s testimonies.

I think what surprised me the most were the many errors and complications around the search and rescue portion.  The lack of communication, and even when communication was established between rescuers, both often spoke to each other in what appeared to be different languages.  We also learn of the struggles of the rescue gear such as the life jackets that for some this life saving gear may have caused more harm than good.  The ability to hoist civilians up into a helicopter while swells of 30-40 feet were below and rain, low ceiling, and poor visibility above.  It was amazing that anyone from the crash survived and that there were not causalities with the rescue teams themselves because many risked their own lives to save the others.

There are some good chapters covering the post-rescue events detailing the many injuries some of the passengers faced along with those that perished or were never found.  Injuries were anywhere from a cut finger and bruises to broken backs and nearly everything in between.  As one would expect from such a disaster, investigations and litigations quickly followed; as is usually the case.  There are some good chapters later in the book about the survivors including the crew and what they are doing today along with the accident investigation findings.

Let me turn my attention from the story to the book’s narration by Fred Filbrich.  Mr. Filbrich did an excellent job narrating the book and paced it well.  I will note for those, like me, who like clean professionally edited audio, be aware that there are some slight audio artifacts such as volume consistency and swallowing in a few parts of the book.  It was not throughout the entire book, but only in select areas.  I would not let this prevent you from listening to the book in any way.

I am grateful to the author and narrator for bringing me this true-to-life story of disaster and survival.  It was well worth my time and will have a lasting impact on me in the future.

Disclaimer: I was given this free review copy audiobook at my request and have voluntarily left this review.

2 thoughts on “35 Miles from Shore: The Ditching and Rescue of ALM Flight 980 Audiobook Review”