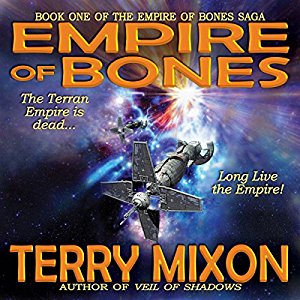 Let me start by saying this book is more in a category of a light space opera, however this should not frighten you away if you like more heavy Sci-Fi books. Just be aware this one has all the goodness of a solid science fiction story without going overboard on the technical details. If you are someone that only enjoys deep and heavy space books, this one may not be for you. If you, like me, enjoy a good science fiction story that has technology, unique ships, and some strange alien races; I think you would enjoy it.

The book is well paced and the author often threw in action or drama at the right times. It did not seem forced and the characters, while somewhat flatter than I desire, were likeable. The author wove in some political struggles along with some family intrigue and surprises along the way. There are aspects of mystery and thriller all wrapped up in an exciting space story. If you are a Star Trek movie fan, the opening chapter will remind you of a specific movie scene. Not that the author copied it, but it will bring it to mind if you are knowledgeable of the movies.

The author did a good job of building up the various worlds, political systems, races, and characters while also describing well the technology and difficulty of space travel. A new and exciting worm hole like object called “flip points” helps the crew to travel vast parts of the universe; like warp drive. I also want to give the author credit for their ability to pace the story’s plot and throw in various “I never saw that coming” moments that kept me listening.

I also want to say thank you to the author for not having to add unnecessary vulgar language or adult material. Even the parts that were romantic were light and not overly descriptive, etc.

With all the above said, I do have a few negative things I would like to include in this review. Again, these are more subjective, but I know I would like to know them when I read other’s reviews or when I think about making a book purchase. At times I found the use of some words to be something I would not think a race of this intelligence would use. A term like “wicked” (not used often) pulled me out of the story briefly. Also the use of normal measurements like the metric system were used to describe an object instead of some other word like ‘clicks’, etc. The author also includes in a few places the use of alcoholic beverages (beer and hard liquor), but these are not heavily focused upon.

I would say that the story is safe for most teens as long as the above is not an issue for them. The story itself and the narration can be enjoyed by both young and old alike.

Veronica Giguere did a good job of narrating this book. She currently (at the time of this review) has over thirty other titles narrated on Audible across a number of different genres. So it is no surprise it was well presented. She was able to voice the many different characters making it easy for me to stay engaged and know who was speaking. I will say the princess’s voice by the end of the book sounded more like a little girl to me, but this is more a subjective comment.

I did want to note a number of audio artifacts in the recording that by the end of the book appeared to be more frequent than at the start. Items such as background noise, swallows, and others which were often heard during times of longer pauses. Not something that would keep me from listening to the book again, but not as crisp and clean as other books I have listened too.

I would like to thank the author and narrator for all the hard work that goes into producing a book that I can enjoy. I know it is not an easy task and it often takes months or years of their life to get to the point of publishing it. Well done.

Disclaimer: This book was provided to the reviewer free of charge in exchange for posting a non-bias review.